Why is College so Expensive?

on May 08, 2020
Why is college so expensive? This is a question I never thought I'd be asking myself. When I was graduating high school in 2008, college was expensive, but no one questioned the cost. Everyone understood that you tried to do as well as you could in high school, so you could get into the best college you can, and the rest will take care of itself. Our parents told us stories about their rich friends who all went to college and now have great jobs and a lake house. Things we could only dream of. So we, as young adults, knew that college was the best way to increase our income and wealth. So why are so many questioning it now? Why has college gotten so expensive? 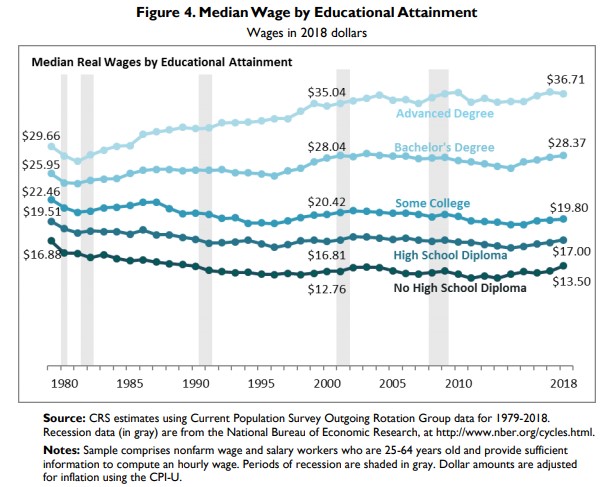 There's no denying that college graduates earn more on average than non-college graduates. In fact, according to a congressional research report from 2019, college graduates out earn non-college graduates by about 67%, or 11$ per hour. That's a huge difference, but it comes at a cost. The cost of attending college has skyrocketed over the past 20 years. Accounting for inflation, the cost of a 4 year degree has increased by 54%. What once cost about $15,000 in 2000, cost over $23,000 in 2016. But what about public universities? Surely those are still a good deal. The government is using tax dollars to help keep the costs down, right? Unfortunately, the cost of attending public universities has increased at an even faster pace rising by more 64%. What's worse is that over that same time period, the average hourly wage for those with a bachelor's degree has only increased by 1%.  After controlling for inflation, the average hourly salary for someone with a 4 year degree in 2000 was $28.04. In 2018 it only increased to $28.37 per hour. So not only has the cost of school astronomically increased, wages are essentially stagnant. No wonder school seems unaffordable.

How about graduate school? Sure, graduate school is expensive, but doctors and lawyers make a lot of money, so maybe they aren't effected by this. You're probably better off with a graduate degree of some kind, and wages have still increased for this cohort since 2000. The average hourly salary for someone with a graduate degree in 2000 was $35.04. In 2018 it increased to $36.71. That's an increase of 4.8% over 18 years. Better than wage increases with a bachelor's degree, but again, essentially flat. And it's the same story as 4 year degrees for the cost of school as well. From 2000 to 2017, the cost of graduate school tuition has increased by 59%. For graduate programs, public universities have increased their tuition prices even faster, raising them by 100% between 2000 and 2017. So even though wages for those with graduate degrees have increased very slightly, they're still no match for the race against tuition costs.

The deeper cause of increasing tuition prices is likely linked to the increase in student loan funding. This greatly increases the demand for college, which is good, but the government has no reservations providing students with the loans necessary to pay for school in the near-term. In the long-term, the government will likely end up forgiving trillions of dollars in student loan debt, as the demand for highly trained professionals remains, but the costs of school greatly outweigh the financial incentives of attending. By boiling it down to a comparison between tuition prices and wages, we can see how the cost of college is a much larger burden for students today than it was even 20 years ago. As the trend continues, it begs the question of whether anything will change. Or will we simply reach a point where all students pay on an income-driven repayment plan, and pursue some form of student loan forgiveness, effectively adding a 10% "tax" to their wages for either 10 or 20 years.